Living in a Field of Hats

some ramblings and reflections on working with students in Herts and Beds.

Now, just the word singleness conjours up may different images I’m sure. I’m guessing for a lot of girls aged 10-30 (and probably over and probably a lot of men as well!) it’s a hugely negative thing. Why? Because we are so often told by the media that its normal to have a partner – or to at least be really wanting one! I’ve really tried but can not think of a poisitve single person in the media. It isn’t seen as ‘normal’. As Christians we believe that the Bible is God’s Word and what is in it is from Him and totally true. So, why is it that so many Christians seem to ignore:

I wish that all men were as I am. But each man has his own gift from God; one has this gift, another has that. Now to the unmarried and the widows I say: It is good for them to stay unmarried, as I am.
1 Corinthians 7:7-8

Now, obviously this has to be taken compltely in context, and I am not trying to say that marriage is bad at all, because it isn’t biblically worse than singleness. They are both equal. However, I think that it is very true that in many churches today the prevailing view is that singleness is what happens before you find ‘the one’. It’s not a situation that people are expected to stay in much longer than their 20’s (and I do realise that I am only in my early 20’s!). This is expressed in so many different ways! I have lost count of the amount of times that I have been told people that “it’ll be my turn to get married next”. Where’s their proof?! People, and I’ve noticed it in married people and single people, seem to just assume that marriage is for everyone and that there’s something wrong with you if you don’t think like that.

The way many churches are set up can quite easily back this view up. For example having a 20 & 30’s group can actually give the impression (and it easily does give the impression) that if you over the age of 39 then you are no longer expected to be part of that group and in fact you should be in a relationship and participating in areas of church life more appropiate to your age – i.e. families

I’ve struggled with this for quite a while now in varying measures. It is hard being made to feel (99% of the time at least unintentionally) like I should be married, and should be expecting God to provide someone soon but I’ve known that there is no Biblical promise.

But, recently I’ve been thinking about this a lot. I’ve been thinking about my future, and the areas that I think God might be leading me in. There really have been times when I have gotten freaked out by the fact that a marriage and God’s will might clash (which is ridiculous I know!) But even thinking about not being free to be able to go and serve God wherever he might call me has been really difficult! This has led me to really pray about the issue quite a lot, and I’ve ended up having a lot of conversations with single Christian friends quite randomly which have been so helpful. And now, I think that I am in the place where I can actually whole heartedly say – “Yes I am single. No, it isn’t second best. It may last my entire life, it may not but either way I am happy with that. I am happy to be freed to serve God in places which I couldn’t if I was married. Whatever my situation my only aim is to serve and glorify God – whether that being single and more able to travel, or married and serving in a very different context.”

It has taken months to get to this situation to whole heartedly say that. This does not mean that it is easy in any way shape or form, but I know that the God we serve is good and He has a very definite will for me and I am happy to completly submit to that. If the Bible says that singleness and marriage are equal then why should I say different???

As one of my first ever blogs, I blogged about Moldova and the trip I had there last summer. Some of you will know that I am going back this summer (woop woop!) so instead of doing a boring plain talk to explain to church what I am doing and why I thought I’d do a video of last year to give them a flavour so here it is!

It’s my first ever video so bear that in mind!!

I went away for a few days a couple of weeks ago which was really nice to just have some space  and spend some quality time with my friend Sarah. Went to Norwich one day and was just wandering around on my own and came across this piece of grafitti on a wall. It really made me think! Sometimes this really is how I feel about God. I hope he meant it when He said that He fogave my sin. And, I know that it is true, that He did mean it!! There’s so much that shows it – and especially as He’s given us  a deposit – His Holy Spirit. How stupid it it to doubt given all of that?! 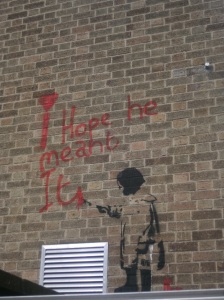 I’m in the midst of a three day course that is going to enable me to mentor a year 10 student in a local SOuthend High School, in a deprived area. Was really excited about this possibilty so decided it was worth giving up three days of my time . . . however, it’s really weird!! Basically it appears to be really post modern in terms of there is no such thing as truth on the course – and your opinion is just baggae holding you back and you should forget all your existing opinions “park them at the door” and engage with what they are saying. Some of which it has been helpful to do. For example, what do i mean when I say yes? Do I mean Yes – Yes, Yes- Maybe or Yes- No? Quite challenging and also, what are my attitudes to rules when I’m told not to do things for no good reason. Basically, the course appears to be designed to help us recognise our trigger points, what choices we actually do have even when we think we don’t have a choice and how we can relate this to young people as well as those around us. I say ‘appears’ because all the teaching is abstract and really doesn’t appear to fit and I’m kind of just guessing what I think is going on.

However, the last thing we looked at today was that as human beings we are made “whole and complete and without flaws”.

Immediatley my instincts shouted at me that that was conpletly wring – we know that “all have sinned” and therefore aren’t flawless. I tried to explain this but the only answer I received was that I was putting my previous experience into play where i shouldn’t . . . . . .

Was i? Or was i just standing by what I know to be true? Any comments would be very helpful!

I’ve been thinking a lot recently what exactly is a church. I mean, obviously it isn’t the building and I do find it good to think of a church as just a rain shelter as my old vicar said once. And, a church is a group of people, who are all centred around Jesus Christ. But, it isn’t that simple sadly. We do add our own criteria to what a church should be as well.

Went back to my old church on Christmas Eve (the one which I went to when I was a child) and realised that in my mind I had completly written it off as a place where Christians gathered and instead had it pegged as somewhere where there was a lot of people who had done things that had hurt me when I was a teenager and that didn’t preach the gospel. Now, it is true that there are a lot of people in that church who had hurt me when I was younger but that was 9 years ago now, how should I now view them – now that I am a Christian which I wasn’t then!

I wrote them off very quickly in my head as a church that doesn’t preach the Bible, full of people who aren’t really Christians. This may be true but should I have done that? No! Although I was proved right by the Christmas Eve Christingle service having absolutley no gospel input I had already judged them before I arrived and were almost waiting for them to fall. There’s background and there’s reasons but that’s not the point.

Got round to thinking about the way in which we do judge other churches and other Christians (by we I’m meaning conservative evangelicals). It’s so easy to judge people on the ways in which they do things such as which version of the bible they use, which songs they sing, who their congregation includes and say that they aren’t a real church because of x, y and z. Basically that they don’t do things exactly the same way that we do.

How does this appear to outsiders? When we have very definite, judgemental ideas about how a church should be and therefore judge other churches how does it look to non Christian? Like there’s actually lots of different forms of Christianity who are all claiming to be the right, and only true believers of the gospel. Now, I’m not saying that there aren’t Christian denominations who do things that I think are totally wrong and not from the Bible but surely the main definition of a group of believers in the Lord Jesus Christ is the most important thing to look for before judging them as an unbiblical church?

As part of my masters, we have lots of discussions in the lectures about things such as baptism, salvation and so on. There’s a huge wealth of opinion in the room as there is Anglicans, Romanian Orthodox, Catholics, Salvation Army to name but four (I’m sure I’ve missed some one off!) and there’s no way that we agree in anyway shape or form on most of these issues. Interestingly a Buddhist/Hindu has joined our course recently and it was one of her comments last week that got me thinking about this again. For our assignment we have to write from our own tradition (denomination) point of view, and the Buddhist is meant to try and do it from a Christian point of view (as it is a Christian masters) and she said

“How am I meant to do it from a Christian point of view when you all disagree with one another and don’t agree on anything!”.

It’s a good point! What are we showing people about our attitudes to church when we all disagree? How can people see the beauty of the church when all they see is inter fighting between denominations. Surely we should be aiming to seek fellowship with other church traditions as much as possible, rather than looking for reasons why they aren’t bible teaching in the ‘right’ way, or worshipping in the ‘right’ way or even praying in the ‘right’ way!! We should look for the good!